What is permitted with film and video?

As a student or employee at Aalborg University (AAU), you are in touch with many different types of media. All of these are comprised by the copyright act. This page provides you with important information regarding those elements of copyright law that you - as an affilate of AAU - should know about before you use texts, pictures, film, or any other type of media .

Feature films, documentaries, short films and the like, as well as short videos, are subject to copyright law. Thus, if you want to use or show them in the context of your study or employment at Aalborg University, you must obtain permission for that specific purpose by contacting the copyright holder of each film.

Alternatively, the copyright must be expired on the film in question - this happens 70 years after the death of the copyright owner, or if it has been released under a creative commons license. Otherwise, it cannot be used in the contexts of AAU. 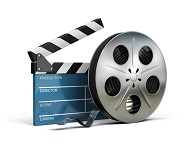 From time to time, teachers at Aalborg University must show or offer a feature film, documentary or similar in connection with exams or seminars.  This is not a problem, as long as the offered film is not shown to the students or is shared between students and staff.

The teacher is free to offer the film for the student’s curriculum, but is not permitted to show, upload or share the film with the students - not event in a closed forum in Moodle - without permission from the copyright owner. It is the responsibility of the individual student to have seen the film, if it is on the curriculum or part of an exam.

Obtain permission for use and viewing of feature film

In most cases, the film company holds the rights to e.g. a feature film. However, in some cases, you must obtain permission from certain rights holders who have not transferred their rights to the company.

Motion Picture Licensing Company, Denmark (MPLC) represents a large amount of rightsholders from the film industry and may be of assistance, if you want to proceed and have copyright clearance of a film that you would like to use.

The committee for the Protection of Scientific and Scholarly Work (UBVA) has made a video about the use of film in regard to e-learning. The same rules apply if you wish to use films in regard to ordinary teaching. ENGLISH SUBTITLES!

You are permitted to use YouTube videos, Vimeo videos and the like, if the copyright owner has uploaded the videos

YouTube, Vemeo and similar online platforms contain user generated-content. It is precisely because the copyright owner him/herself has uploaded the video personally that you are permitted to show it. However, it may be difficult to determine who the copyright owner is and whether the video is uploaded legally. Many people copy the films, pictures, music etc. of others without the consent of the original copyright owner.  These are illegal to show and share with others.

Before you show a video from YouTube, Vimeo or a similar platform, you should look into:

If the above is clear, you can show the video to others.

You are not permitted to alter or use YouTube-, Vemeo-, or other videos for other purposes, even though the copyright owner has uploaded them

The videos are subject to copyright law and as such cannot be altered or used for purposes other than those specified for the video, unless it is marked with a creative commons license.

Before you use or alter a video from YouTube, Vemeo or another similar platform, you should look into:

If you cannot get answers to the above questions, you should do as follows:

Pay attention to pitfalls in connection with the term “fair use”

“Fair use” is a term that derives from American copyright law, which permits the user to use the works of others under certain circumstances - e.g. in connection with non-profit or educational purposes. Many YouTube users refer to the fair use clause when they use the content of others and make new videos. However, they are not always right.  It is very difficult to determine whether it really is a case of fair use, when a user use the work of someone else. It often calls for interpretation, and in most cases, the outcome does not become clear unless the copyright owner decides to take legal action. Therefore, it is NOT safe to show or use videos that state that the content is used according to the concept of fair use.

Besides, the term “fair use” is an American concept associated with American law, and we do not have a corresponding concept in Danish copyright law. One can therefore not invoke the same right as a Dane and use the works of others without permission.

You can use a film without permission, in cases where the copyright holders to a film have been dead for 70 years

The copyrights to a film expire 70 years after the death of the director, author, and other rights holders. If a film is that old, it must be reproduced and used without permission. Read more specifically about this here.

Individual film frames are not protected as a film, but as individual photographs or drawings (e.g. animated film). You can read more about what you can and cannot do with photos and graphics here.

Links to film with a creative commons licens or without copyright

Flickr is a photo-and video-sharing website, with photographs. Check each individual work to see what is permitted.

The Internet Archive is a large online library that includes text, books, music, pictures, film, software as well as archived Web pages. Many of the works are no longer comprised by copyright law, or are covered by a creative commons license. Check each individual work to see what is permitted.

Mediastream is a database that students and staff at Aalborg University have access to through Aalborg University Library. It contains among other things television and cinema advertisements. You are permitted to use the contents of Mediastream for research, study and educational purposes only! You are not permitted to download, forward, alter or use the content commercially. Public projection of content for purposes other than academic is not permitted.

Vimeo is an online platform where you can upload your own videos. You are permitted to project videos from Vimeo, if the work has been uploaded by the owner.

YouTube is an online platform where you can upload your own videos. You are permitted to project videos from YouTube if the work has been uploaded by the owner.

Here is an overview of what students and staff at Aalborg University are permitted to photocopy, scan, and upload.

All students and staff at Aalborg University are free to ask questions regarding copyright to the university library's Copyright Team at ophavsret@aub.aau.dk

This page is regularly managed and updated by the Copyright Team at Aalborg University Library. Latest update: March 2020. “Fotos: Colourbox.com”